America’s state divisions are exceedingly important in national politics. They determine presidents by their electoral votes. Each gets two Senators regardless of their population, and larger divisions within the union are often seen as a “red state/blue state” dichotomy.

It is difficult to measure the political attitudes of an area like a state. Major American polling organizations rarely if ever divide their national data up by state. Trying to put together a patchwork of state polls is problematic as well, because the polls are done by different criteria in different places. State legislation provides a hint to public attitudes, but individual laws vary wildly between states. Also, American federalism tends to put more emphasis on national laws, or on local laws for other issues, so state laws often don’t really determine an issue, or show what the state would do if there were not a federal statute already in place.

However, there is one clear way to see a state’s political attitudes: their senators. Senators are voted for directly in statewide fall elections. They cast votes on any Congressional bills. They also have six-year terms, and have a strong statistical trend of incumbents being re-elected, which makes them less susceptible to small shifts in the electorate and more representative of a state’s long-term views. Also, since each state gets two, a state with relatively equal Republican and Democratic blocs will tend to have a senator from each party, while states with a clear preference for a party tend to have two senators from that party.

Plotting all fifty states on-screen would be a visual mess. However, using the controls below, you can pick any combination of states to display on the chart.

These readings are based on their senators’ opinions, NOT on the general public opinion at any given time within the state. This might make some of the readings seem surprising. For instance, many states which are considered “battleground” states in the 2008 general election actually have two senators of the same party and/or two senators with similar voting records, pushing their reading away from the middle and toward a more “red” or “blue” position. The senators’ views (the actual reading) often correlate with the public opinion in the state, making this chart an interesting way to look at state opinions. Bear in mind that this will not always be the case. 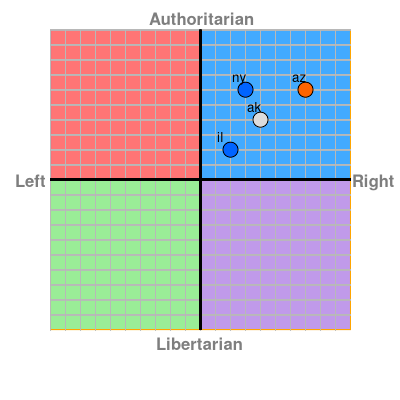