We’ve scrutinised speeches, manifestos and voting records to produce this chart. We then ran our projection past several academics with a special interest in Australian politics and, as a result, were persuaded to make a couple of tiny adjustments. We then contacted some of the correspondents from Australia who had been urging us to produce something. We invited them to position the parties as they saw them, without viewing our chart. Those projections could hardly have been more diverse, so, inevitably, some of our visitors will have disagreements. Our apologies that we simply don’t have the resources to deal individually with all the emails we receive.

While the 2007 Australian election reflects a wider political landscape than that of the US, Labor, under its present leadership, has edged closer to the Liberals than in any previous election. The Democrats and the Greens are now economically closer to traditional Labor, while Labor occupies territory closer to the Liberals of the 1980s. However, the rightward and upward drift of the Liberals allows Labor to still claim considerable distance from them. Within Labor, of course, there are right-left tensions, as most of its members accept the neoliberal agenda with either resignation or enthusiasm. The Political Compass™ demonstrates that the One Nation party, popularly termed “extreme right”, owes its extremity more to its social policies than to its economic position. 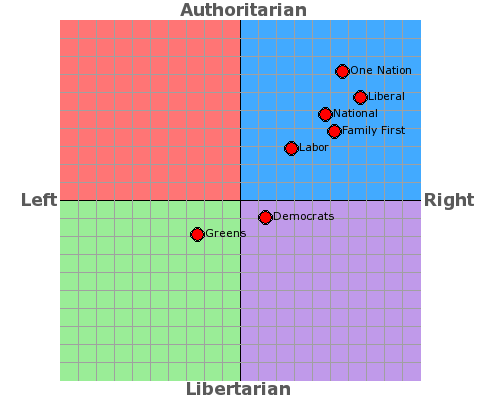