Reflections on the US Presidential Election Result

The US election result was less a victory for sexism and racism than the defeat of Wall Street’s globalisation project — the one percent who benefit from arms contracts and free trade deals. Clearly large numbers of Americans, uncomfortable with the personality of Trump, nevertheless quietly voted for him and confounded the pollsters. It was a remarkable backlash against the political establishment, weary of vacuous promises of hope, and impatient for actual change.

Trump, more than any other incoming President in living memory, owes little to anyone. He was the outsider who won not because of the Republican Party, but in spite of it. He will not come to grips with the urgent issue of climate change. Neither will he do anything to reverse the country’s moral and intellectual decline.

The Democratic Party has only itself to blame. Middle and lower class anger towards the Washington establishment was all too evident. Poll after poll during the primaries indicated that Sanders — their own anti-establishment figure — had a far better chance of beating Trump. Thanks to Wikileaks, we now know of the party’s manipulation of its primaries. Despite all the evidence to the contrary, Hillary would receive the nomination. The candidate of the military industrial complex and international finance capital was entitled to it.

In Political Compass terms, the US has finished up with a socially reactionary anti-establishment president. It might well have had a socially progressive anti-establishment one. The inescapable conclusion is that the Democratic Party hierarchy preferred Clinton to lose than Sanders to win.

In the wound-licking to come, might the party move closer to its pre-Clinton, pre-globalisation Keynsian past? Might it perhaps campaign for electoral reform and address undemocratic absurdities like the electoral college? Might it even recognise that, in the interest of a fully functioning democracy, the smaller parties must also be heard? It’s doubtful that one in ten-thousand Americans has heard of Jill Stein, not to mention her substantially fresh take on so many issues.

Trump is an old-fashioned isolationist and protectionist. As alarming as the thought of his impulsive finger on the nuclear button may be, he will diffuse the escalating tensions with Russia, and the attempts to portray Putin as the new Saddam. He will also hopefully fulfil his promise to tear up the planned Trans-Pacific Partnership Agreement, which many nations are being dragged into. Far from being merely about free trade, the TPPA gives corporations unprecedented and dangerous engagement in many aspects of governance.

Most importantly, Trump’s every move will be analysed and criticised not only by the Democrats, but also by large chunks of his own party. This is a healthier situation than during the previous eight years, when a Democratic president delivered a largely Republican programme while his party remained shamefully silent. A socially reactionary and highly unpredictable new president gratefully inherits the Obama administration’s provisions for illegal detentions without charges, domestic spying of citizens and extrajudicial assassinations — precedents that would be damned as quasi-fascist if Trump had initiated them.

We’re all in for an interesting — and bumpy — ride. 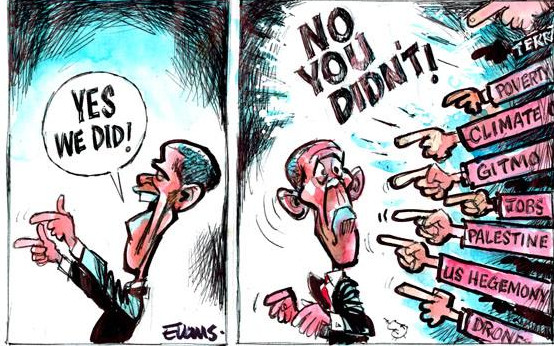