A few words on the New Zealand Election

This time around there can be no more important and over-arching issue than the secretive Trans-Pacific Partnership Agreement (TPPA) which New Zealand is poised to sign, yet receives scant attention in the campaign and is ignored in any of the "surveys" that we've seen. From the authenticated leaked information that's available, it's clear that this agreement is much more than the free trade deal that its National Party adherents describe. It is in fact an unprecedented move towards international corporate involvement in governance, including vital areas like education, health and pharmaceuticals, environment, agriculture, investor rights and much more. Under the TPPA, government legislation in the interests of the public — but against the interests of foreign business — may be challenged by a corporation in a closed tribunal on the grounds of impeding free trade. This precise thing has already happened in Australia, where the country's plain packaging laws on tobacco were legally challenged by a tobacco company. The truth is that many of the electoral policies of some NZ parties could not be implemented under the TPPA! This, and not the flag, is the real sovereignty issue, and it`s barely being raised. By comparison, every other electoral issue is window dressing.

Most of Labour's hierarchy are broadly for the TPPA, and the last thing they want is for it to come under scrutiny in the election campaign. The increasingly blurred lines between National and Labour over the big issue of economic policy looks likely to help Labour suffer its lowest aggregate vote for a generation. This will be exacerbated by a low voter turnout, reflecting a high voter turn-off. Given such vacuous straplines as Labour's Vote Positive and the National's Working For New Zealand, it's little wonder. The Greens' impressive co-leaders look set to attract many from the disenchanted Labour Left. The Greens, like New Zealand First, the Māori Party and Mana, have voiced criticism of the TPPA. We remain perplexed about the electoral alliance between Mana and the Internet Party , given that Mana's leader is an avowed socialist, while the Internet Party's founder is an economic libertarian in the mould of the anti-state Pirate parties of other countries. Because of the ideological ambiguities of the still little-known Internet Party, we have chosen not to include it on the chart. There is little doubt, though, that it may bring hitherto apathetic younger voters to the polls and deliver its alliance with Mana over the 5% threshold. 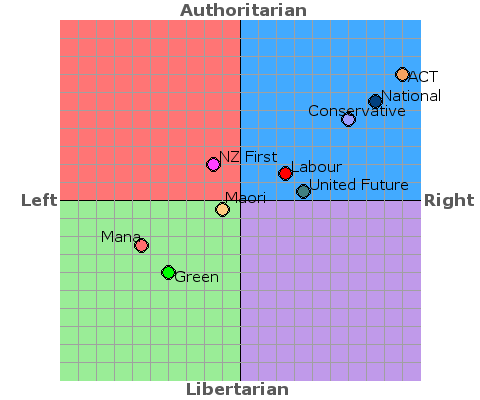