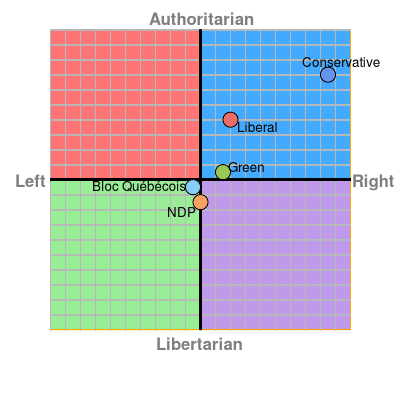 Seldom loved, Prime Minister Stephen Harper is either respected or loathed. Certainly during the last nine years, this most polarising of Canadian prime ministers has shifted Canada’s economics to a harsher strain of neoliberalism, and adopted the draconian C-51 ‘security’ bill. The Harper administration has also moved a considerable distance towards making foreign policy a tool of trade policy. Nowhere is this more in evidence than in the country’s uncharacteristic assertiveness abroad on behalf of Canadian mining interests. The question is to what extent Harper has taken the population with him.

The Liberals’ Justin Trudeau speaks for a gentler Canada, though hugging the so-called centre is increasingly precarious as the political fulcrum shifts relentlessly rightward. During the era of his father’s Liberal administration, the party was more genuinely centrist. In those days, the Conservatives occupied a similar space on The Political Compass to where today’s Liberals have positioned themselves. While the non-Conservative public might recall Liberal plans for National Child Care and other provisions ditched by the Conservatives, Justin Trudeau nevertheless hardly created any clear blue water between his party and the Conservatives by allowing the passage of the deeply unpopular C-51 bill — not to mention his support for the sellout of strategic energy resources to China, the Keystone XL Pipeline and other Conservative initiatives.

Anti-Conservative voters would seem to hold less enthusiasm for Conservative Lite, which might help explain the swell in support for Thomas Mulcair’s traditionally left-leaning NDP. But Mulcair, too, has setup his economic tent in centreground, in keeping with the directions of most other social democratic parties today. Indeed, the NDP’s tax policy is now generally more conservative than that of the Liberals. The Liberals’ recent promise to run an anti-austerity deficit is in surprising contrast to the NDP’s neoliberal commitment to balance the budget. While the Greens are considerably more conservative than their sister parties just about everywhere else, they have in Elizabeth May an articulate and persuasive leader. The Greens would probably work well in an NDP coalition that might, in all likelihood, require Liberal participation.

The Canadian Election 2015 chart may be tweaked in the event of significant new policy commitments made during the campaign.