This chart was constructed on the basis of the speeches, public statements and, crucially, the voting records of each of the candidates. During the election campaign, we’ll be tweaking their positions as, inevitably, some of them change. We’ll also be adding other charts as the campaign continues.

When examining the chart it’s important to note that although most of the candidates seem quite different, in substance they occupy a relatively restricted area within the universal political spectrum. Democracies with a system of proportional representation give expression to a wider range of political views. While Cynthia McKinney and Ralph Nader are depicted on the extreme left in an American context, they would simply be mainstream social democrats within the wider political landscape of Europe. Similarly, Obama is popularly perceived as a leftist in the United States while elsewhere in the west his record is that of a moderate conservative. For example, in the case of the death penalty he is not an uncompromising abolitionist, while mainstream conservatives in all other western democracies are deeply opposed to capital punishment. The Democratic party’s presidential candidate also reneged on his commitment to oppose the Foreign Intelligence Surveillance Act. He sided with the ultra conservative bloc in the Supreme Court against the Washington DC handgun ban and for capital punishment in child rape cases. He supports President Bush’s faith-based initiatives and is reported in Fortune to have said that NAFTA isn’t so bad. Despite all this, some angry emailers tell us that Obama is a dangerous socialist who belongs on the extreme left of our chart. In an apparently close race, genuine leftists McKinney and Nader may attract sufficient votes from Obama to deliver McCain to the Oval Office.

Sarah Palin is popularly described by her detractors as an extreme right winger. In reality, she has some protectionist leanings. Her comparatively extreme positions are on the social rather than the economic scale. While her pro-gun, pro-Iraq invasion, anti-gay and anti- abortion positions are applauded in some quarters, Joe Six-pack may not be quite so enamoured with what Palin’s denominational website, the General Council of the Assemblies of God, has to say:

We urge all believers to avoid the Satanic tool of alcohol which destroys lives, damns souls, and blights society.
One of Palin’s evangelical supporters reminded us that Obama’s background was as a mere community organiser. Well yes, but so was Jesus, while Pontius Pilate was a governor.

One present difficulty in positioning the candidates concerns the nationalisation of investment banks. While a commitment to universal healthcare shifts the candidate to the left, what are we to make of tax-payer funded corporate healthcare? The United States seems to be in the throes of a unique political formula: socialism for some corporations and private enterprise for most individuals.

The Libertarians’ choice of diehard conservative Bob Barr is particularly odd. Their party is now led by an anti-choice enthusiast for the death penalty who initially supported the Patriot Act, though later regretted it. He is also pro teacher-led prayers. While Libertarians tend to place more importance on economic matters, Barr has nevertheless not displayed unbridled enthusiasm for free trade, although he ticks most of the right boxes on matters of taxation and public spending. 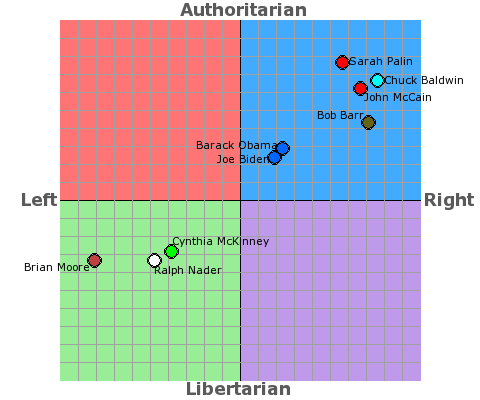 For those who are interested, we include here our earlier chart showing most of the candidates from the Primaries. Observant readers will notice shifts in the positions of Biden, Obama and McCain. 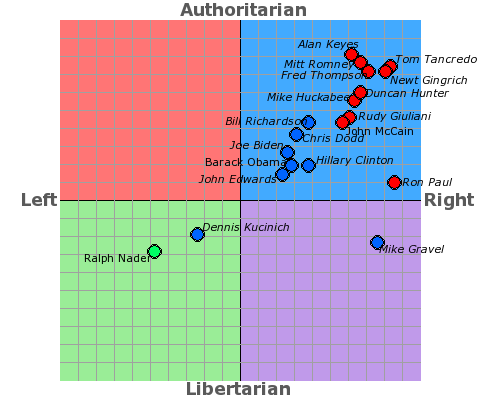 It is important to recognise that The Political Compass™ is a continuum rather than consisting of hard and fast quadrants. For example, Ron Paul on the social scale is actually closer to Dennis Kucinich than to many figures within his own party. But on the economic scale, they are, of course, far apart.

Perhaps the most breath-taking u-turn in the primaries belongs to Mike Gravel, a left-leaning Democrat and undoubted civil libertarian who has now put his lot in with the Libertarian Party. On the social scale this doesn’t represent much of a leap, but economically the mercurial Mr.Gravel, a long-standing champion of universal health care and a redistributive economy, has vaulted from social democracy to a radical neo-liberal platform well to the right of most Republicans.